Brotherhood Steadfast Despite the Times 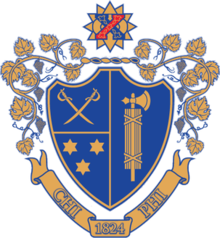 It has been said countless times that we are living through an unprecedented global pandemic. Nevertheless, the bonds of brotherhood remain steadfast. As a silver lining, here are a few anecdotes that demonstrate the resilience of the friendships formed at Chi Phi.

Michael Pasterick ’05
I moved from Atlanta to Washington DC in 2018, and took a new role as Washington DC Practice Leader for Aon Consulting. As for my personal life, I am married with two kids, my son is 6 and my daughter is 2.

The best part about Chi Phi is the lifelong friendships. I actually just got together last weekend with 12 of my Chi Phi brothers (both in person and virtually) for a fantasy football draft we’ve held annually since college.

Unfortunately, some of my favorite watering holes are no longer with us: The Darkhorse, Rathskeller, and G-Man. Excellent memories of all of those, but had equally memorable times at others. Also, I enjoyed football Saturdays and skiing at Tussey mountain. I really enjoyed key football weekends, such as Blue/White and Homecoming. I still attend Blue/White with my wife and small children.

Cole Waldhausen, Active
Coming from a small town I found it difficult to adjust to the large community that Penn State has. I mostly stuck to a small group of friends my freshman year, but knew I wanted to be involved in something bigger. A few of my friends from freshman year were rushing our first semester sophomore year, and I decided that I would join them and look at some of the fraternities at Penn State. I ultimately found myself really enjoying the house and the guys at Chi Phi and decided that it was something that I wanted to be a part of. All the brothers were very welcoming and were easy to get along with. I knew from my initial visit to the house that I wanted to be a member.

[Since joining], I’ve learned how to work with numerous different people towards common goals, as well as worked to come to compromise when there are disagreements on certain things. Chi Phi has provided me the opportunity to meet people, grow as a leader, and explore networking opportunities with alumni as well as other people involved with the chapter.

Jim Hufnagel ’68
We are currently waiting out the pandemic at our home near the ocean on Cape Cod. We recently had a 50th reunion with 7 Chi Phi brothers, the friendships we forged so long ago continue to endure. The Phyrst Bar and the Skeller was where much of our socializing was done back when I attended Penn State. I occasionally attend Penn State Football games, but I always watch. Great Friendships and memories were forged at those games.

Vishal Shah, Active
I have been involved with Alpha Delta since the Spring of 2019. Upon rushing, I met a lot of cool and interesting people but what really drew me to Chi Phi is that there are so many kinds of people in the fraternity and everyone is accepted and welcomed. I met people with a wide range of personalities and backgrounds, and they all said the same thing: that the fraternity is like their second family. That is what I wanted to get out of Greek life, so the choice was clear when I received a bid.